More than anything, watching the kids on Stranger Things obsess over their favorite games hits us with heavy nostalgia for those classic games of the 1980s. When you celebrate this modern classic of kids against the supernatural, whether you binge-watch entire seasons or savor each episode slowly, you’ll want an ideal activity to symbolize that you stand with the citizens of Hawkins, right? Don’t be a mouth-breather – grab your Eggos and your wrist-rocket, and check our picks for the best games to capture the feel of Stranger Things.

Home By Dark (Protagonist Industries) – It was only a matter of time before a game tried take us to the Upside Down – or rather, allowed us to experience a story similar to Stranger Things, E.T., Super 8, or The Goonies. Sure enough, Home By Dark is a GM-less storytelling game that puts players in their own Spielberg movie plot as kids who encounter the incredible unknown. In the style of Fiasco, players collaborate to build the story elements of their roleplaying session, from the Secret and the Danger to the Pursuer. They also build characters, which have a combination of Hope and Responsibility dice to use in game. Having set up the storyline, players then play out two Acts of the story, leading to a Final Confrontation, concluding the plot. The digest-sized book will require someone to sit down and, well, digest it before play can start, so allow yourself time to prep this RPG before trying to make curfew.

Ghostbusters: The Board Game (Cryptozoic Entertainment) – Since Season 2 of Stranger Things has the boys getting all geared up in iconic Ghostbusters uniforms for Halloween, why not take that a step further? Ghostbusters: The Board Game is a mission-based, cooperative game with a customizable game board, making this a great long-term gaming investment. The game draws upon both the movies and the more recent comics to present stylish plastic figures that summon up all the feels of riding along with Ray, Egon, Winston, and Peter in ECTO-1. If you ain’t afraid of no ghost, you should definitely scare up a copy.

To score bonus points with your party guests, track down the Ghostbusters RPG or Ghostbusters International (West End Games), and really settle into the role of busting spooks, ghosts, and spectres for fame and cash. It’s out of print, but eBay is your friend. 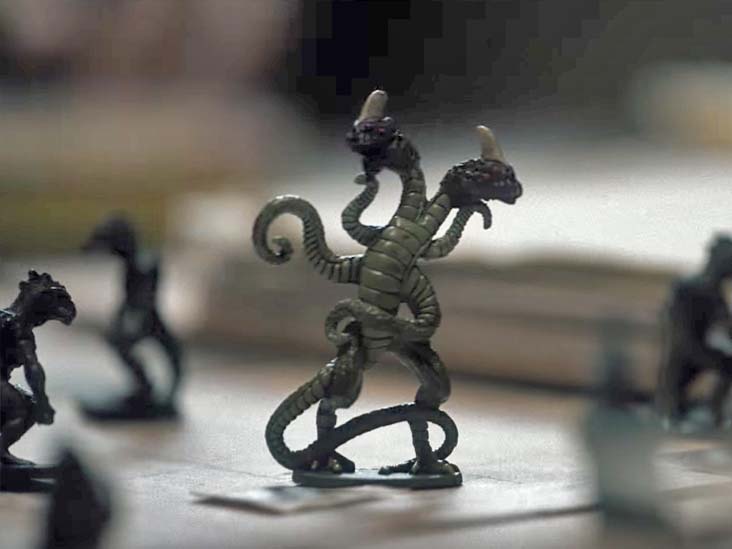 Dungeons & Dragons (Wizards of the Coast) – It’s a given to put the original fantasy roleplaying game on this list, as Mike, Dustin, Lucas and Will relate to the world through their understanding of D&D. There’s a few ways to approach a nostalgic quest full of knights and wizards: you could bring out an old edition of D&D and track down vintage Grenadier miniatures akin to those used on the show (oddly space-age looking Demogorgon, anyone?), or have an equally authentic dungeon crawl with the current Fifth Edition. We recommend a romp through one of the classic adventures, like the Tomb of Horrors or the Hidden Shrine of Tamoachan, both of which were updated for Fifth Edition and reprinted in Tales of the Yawning Portal earlier this year. And who knows? Maybe you and your buddies will bond into a tightly knit adventure group, and debate for years whether the mage should’ve thrown that fateful fireball.

Camp Grizzly (Ameritrash Games) – Another section of ‘80s culture is the cheesy slasher films like Friday the 13th and Halloween. Camp Grizzly is a semi-cooperative survival horror board game for 1-6 players. Set in a remote summer camp in 1979, players are camp counselors who must evade Otis, a Jason-like homicidal killer wearing a bear mask. As a team, players search the cabins and campgrounds for the items that might let them escape in one of four different endgames. Otis pursues counselors throughout the camp, and gains strength and speed with each kill. Players will use weapon and item cards, plot twists, and even the campers to stay one step ahead. If they’re lucky, players might also survive “tempting fate” (an actual game mechanic) from foolin’ around.

Check out our interview with Ameritrash Games to hear more about Camp Grizzly, how the game plays, and why it’s a great game to throw a party around.

Jim Henson’s Labyrinth: The Board Game (River Horse Ltd.) – The ‘80s were filled with innocent stories gone dark, such as Legend, Time Bandits, and The Secret of NIMH. But a cult favorite among them will always be Jim Henson’s Labyrinth. Sarah’s baby brother Toby has been taken, and Sarah must go save him with the help of Ludo, Sir Didymus, and Hoggle – each represented by an sculpted figure. Make your way through the mysterious labyrinth, which is formed by playing cards onto the gorgeous, full-color game board. If you reach the castle of Jareth the Goblin King, you must fight your way inside and reclaim Sarah’s brother from Jareth’s clutches. Labyrinth is perhaps matched in popularity only by another Henson classic, The Dark Crystal, for which River Horse Ltd. is working on a game adaptation due in 2018. For now, though, make sure Jareth knows he has no power over you, and defeat the Labyrinth.

We caught a glimpse of an amazing Dark Crystal cosplay, by the way. Check out our SF Comic Con gallery to see for yourself.

Monsters and Other Childish Things (Arc Dream Publishing) – So, imagine a cross between Monsters, Inc and Call of Cthulhu. That’s the territory claimed by Monsters and Other Childish Things, wherein every kid has a horrifying monster as a best friend. Players take the role of said kids, creating children quickly with a selection of ten-sided dice, using them to represent both character attributes and relationships with others. The combat system accounts for both physical and emotional damage, which can transfer from kid to monster for interesting effect (or cascading calamity). Ideas for multiple story settings are provided, making this a great toolset for telling all manner of childish monster tales. Available in PDF, gamers can easily buy and download this delightfully wicked, light roleplaying game in time for Halloween night or Stranger Things: Season 2 shenanigans.

Betrayal at House on the Hill / Betrayal at Baldur’s Gate (Wizards of the Coast/Avalon Hill) – How could we pass up the chance to recommend a cooperative game that inspires such paranoia, frustration, and profound acclaim from gamers? The original Betrayal may have been an early 2000s release, but it’s the atmosphere we’re after here, and this game has it in spades (which you might discover in the basement, next to a fresh grave or two). Each board game sports dozens of different Haunts that guide the game toward distinctly different play experiences. At some point, the Haunt begins, and one or more players may end up working directly against the others. Betrayal at Baldur’s Gate takes the same concept and drapes Dungeons & Dragons theming over it: players explore the streets, buildings, and sewers of the city of Baldur’s Gate rather than the three floors of the House on the Hill. What flavor of betrayal are you in the mood for? Either way, the tone of desperate struggle against overwhelming odds will leave your crew breathless, and win or lose, they’ll certainly want to face Betrayal again.

Talisman (Fantasy Flight Games) – Many designers have tried to emulate the fantasy quest board game, but Talisman was among the first to score a critical hit. As one of a wide range of characters, players travel around the outer edge of the game board, encountering Adventure cards, defeating monsters, and hopefully gaining weapons and treasure. Defeating enough opponents increases a character’s ability scores, who can eventually move up to the middle ring of board spaces, where more challenges await. Finally, when a player thinks his character is ready and has acquired a talisman, he can move toward the center of the board and start the endgame. If he’s lucky, he’ll end up ruling the realm (thereby winning, of course). Originally a 1983 Games Workshop title, the revised fourth edition of Talisman is available at fine game stores everywhere, and GW is reportedly planning a reprint in 2018. Friendly warning, though: just start with the basic game and see how you like it – all the expansions can wound your budget.

Lazer Ryderz (Greater Than Games) – Who can deny the neon levels of coolness achieved by the original Tron in 1982? An adventure within the streamlined vision of a world inside a computer? Riding laser beams on speeding motorcycles in a deathrace? Computer animation? Whaaaat?! With gameplay similar to X-Wing Miniatures, each player controls a racer speeding through space, racing to hit three checkpoints before their opponents. Placing turns becomes more difficult as racers pick up speed – an action simulated by literally dropping curved “track” sections onto the table. To top things off, the game is packaged like a set of gaudy neon VHS cassette tapes, so you can keep it right next to that set of the original Star Wars movies you picked up, when Han still shot first. There’s even a soundtrack for this game! What more could you need to set the ‘80s mood?

Wiz-War (Fantasy Flight Games) – Designed by Tom Jolly in 1985, Wiz-War pits wizards against each other in knockdown, drag-out, spell-slinging combat (hence, the title). Each player controls a wizard within his section of a larger maze, guarding two treasures with his mystic spells while trying to take treasures from other wizards. To win, wizards need to snag two opponent-owned treasures back to their starting space, or eliminate all opponents. The chaotic combats range from lightning bolts and summoning brutish creatures, to just plain punching each other (though snuffing each other out with magic seems more… legitimate, somehow). Cited as one of the game designs that influenced Magic: The Gathering, Wiz-War holds up well, doesn’t require too much of a time investment to play, and the FFG edition gave it a serious graphic design upgrade. This is another game you might want to buy expansions for later, but can get away with just the basic set to see how you like it first.

Dungeon! (Wizards of the Coast) – Want the old timey feel of slaying monsters and taking their stuff, but don’t have time to make characters, find a d20, and come up with a quest idea? Then Dungeon! is for you! Reprinted in 2014, this 1975 design is a game of – you guessed it – exploring a dungeon and defeating Dungeons & Dragons inspired monsters. The dungeon game board is divided into six sections, with beasts that are easier to defeat on the lower levels and deadlier creatures in levels 5 or 6. Defeating a powerful monster can result in a more valuable treasure, or even a coveted Crystal Ball to reveal monster and treasure cards before encountering them. Each character type (Rogue, Cleric, Fighter, and Wizard) has different challenge numbers to defeat each monster, and must gather different total values of treasure before escaping the dungeon to win. Gameplay is straightforward, so it won’t require a ton of attention if your players are busy socializing and snacking between turns, while still giving a taste of fantasy quest gaming.

Those are the games we think Mike, Will, Dustin, and Lucas would flip Upside Down for that you can find today. Of course, you might be lucky enough to score a Dragon’s Lair playable DVD, an old Crossbows & Catapults set, or a menacing Dark Tower board game! Or perhaps your party will delve more deeply into the outer realms, and a Call of Cthulhu game is in your dark future. Whatever gaming you choose for your Stranger Things get-together, use your time for coffee, contemplation, and helping kids face beasts from beyond. 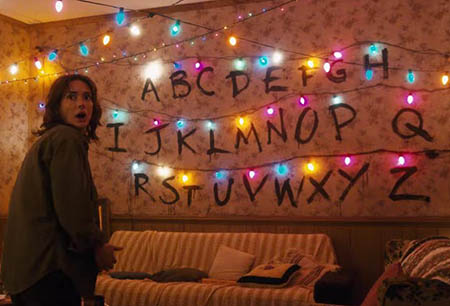 You could also play word games, I suppose…

Leave a comment and let us know what you’ll be doing for Stranger Things: Season 2. Or Halloween – that too.