Founder of Chaosium and longtime game industry trailblazer Greg Stafford passed away yesterday. Greg founded Chaosium to get his work on the fantasy world of Glorantha published, and from there went on to design Pendragon, co-design the roleplaying games of RuneQuest, Ghostbusters, Prince Valiant, and HeroQuest, and influence the entire industry of adventure roleplaying. There’s a lovely post about Greg and his achievements on Chaosium’s site. Please have a look.

His passing brings up memories for me, as I’m sure it does for many Chaosium fans. If you’ll permit me, I’ll share mine here.

For a while in the early 2000’s, I ran RPG.net for Skotos Tech. This meant overseeing the site’s forums, arranging and editing game reviews, coordinating with columnists, and reaching out to publishers for news or review products. My office was in a small, cold room at the back of a building that was once part of the Oakland army base, and had become occupied by Chaosium and Wizard’s Attic. In the same building were a handful of smaller game companies, like a small collective of publishers all huddled around Chaosium and the warehouse rooms for warmth (did I mention it was cold?). When I met Greg Stafford, he was running Issaries Inc., at the opposite side of the warehouse from my office, just past the kitchen and Green Knight Publishing.

In middle school, my classmates and I discovered cryptic gaming notes printed on the back of reams of donated computer paper (usually in non-copyable red or blue ink. It was a simpler time). These notes spoke of the Lunar Empire, of magic based on the red moon, and a behemoth bat-creature that served the Lunar Goddess. I was hooked. I took as many sheets of scratch paper from class as I could, and poured over them in my room at home, trying to decipher their meaning like I was an archeologist who’d found hidden hieroglyphics in an ancient tomb. 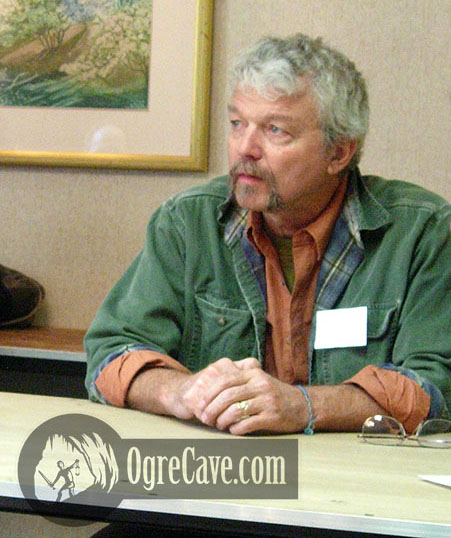 I eventually determined these notes were all early ideas from a still-developing fictional world of Glorantha, and Greg, the parent of a student a couple years ahead of me, had donated the glorious notes that hinted of fantasy adventure. I already knew and played Dungeons & Dragons, but this was a new flavor of awesome – bold, distinct, and thorough. In early high school, I was introduced to RuneQuest, and Glorantha, and it all made sense. A completist by nature, I bought all the RQ game products I could find, and Greg’s name was on most, if not all, of them. Glorantha, the campaign world he had designed for RQ, had blown my young mind with its imaginative twists on a medieval fantasy setting.

So when I was introduced to Greg in the little game company just past the warehouse kitchen, he was already a legend in my mind. I’m sure I gushed to him about how formative Glorantha had been for my own roleplaying campaigns. He could have dismissed me as a fanboy and gotten back to work, but he didn’t. He sat there and talked about all sorts of plans and plots, products that never came to be and others that had runaway success beyond his wildest dreams. And this didn’t just happen once – this happened the first day I met him, and many times thereafter when we each just needed a breather from the daily work routine.

Eventually, everyone left the Wizard’s Attic vicinity (to get clear of the wreckage, mostly – you can look up what happened to Wizard’s Attic yourself, it’s not relevant here), and the creative community of the “Chaosium Collective” dispersed to various parts of the San Francisco bay area, then even farther afield. I did my RPG.net job from home for a while, then moved on to other things.

I stopped seeing Greg at local conventions like DunDraCon (I took the picture above at DDC 2006), but I would run into him in downtown Berkeley from time to time, and he’d invite me to walk with him on each occasion. As he purposefully strode across town to the subway station (I always caught him on the way back from something), he would tell me all about the plans he envisioned for Glorantha and other creations of his to make a big comeback, his plans for travel with his family, and what he’d heard other members of the Collective were doing now. Over time, Greg moved away, and I stopped seeing him, but I’d hear about his plans through others, and heard that he’d returned to guiding Chaosium in 2015. Clearly, if you saw him accept the 2018 Silver ENnie Fan Award for Best Publisher on Chaosium’s behalf, Greg never stopped plotting and imagining, and many of us appreciated his efforts.

Thanks for everything, Greg. See you around.