So you may have heard of the collaborations between The Op (formerly USAopoly, best known for its hundreds of versions of Monopoly) and Games Workshop (best known for Warhammer 40K and numerous fantasy or sci-fi board games). One of the first announcements to come from the team-up was on licensed versions of the classic fantasy board game, Talisman. These licenses took the game in new directions, though, to be sure – Talisman: Kingdom Hearts Edition, and Talisman: Batman Super-Villains Edition. I’ve had the same internal struggle other Talisman fans may have gone through, wondering if these adaptations will “mess up” the game I enjoyed so much. I’ve tried to hold my judgement until learning more from the press releases, and in the process, decided I’m going to check them out. First, the Kingdom Hearts press release… 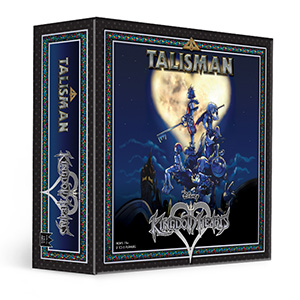 Talisman: Kingdom Hearts Edition reveals Sora, Kairi, Riku, King Mickey, Goofy, and other comrades as figures at the helm of an exciting and different way to play the tabletop classic. Inspired by the original Kingdom Hearts video game franchise, the 2- to 6-player game’s objective compels players to acquire the needed Strength and Magic to seal the Door to Darkness and keep Heartless from consuming the communal worlds.

And from the initial Talisman: Batman press release, I got this description… 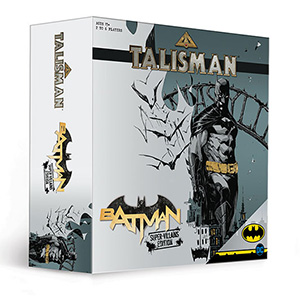 Talisman: Batman Super-Villains Edition allows players to take on the role of Gotham City’s notorious evil-doers, sneaking and fighting their way through Arkham Asylum’s two floors and central tower to be the first to subdue Batman and successfully release its dangerous inmates.

The anti-heroic objective in this take on the classic fantasy tabletop game focuses on building the Health, Strength, and Cunning of the Caped Crusader’s enemies. The game suits 2-6 players ages 13 and up, and can be played cooperatively or against other foes before one winner can earn the reputation of King or Queen of the criminal underworld.

Do these sound like Talisman? Not exactly. Talisman was one of the first fantasy quest board games to capture the general feel of advancing your character, meeting strange creatures, killing them, and taking their stuff. Calling it a “fantasy quest” game was appropriate, as a full game session might take 1-2 hours, but more likely would take an entire afternoon – much like a D&D session. In fact, just getting through an entire game felt like a quest, and added to the feeling of victory if you were crowned the winner. These newer Talisman games sound suspiciously… new. Fans of any genre know the sense of dread that comes with seeing your favorite property – from games, to movies, to books, to comics, and any other fandom, really – treated in a way that doesn’t feel like it honors the original source. If not Talisman, there’s surely several things you can think of that bring up those feelings right now. There’s excitement about revisiting the property you love, for sure, but also fear of tainting its memory. Fans of The Dark Crystal are in the final stages of this fear as I write this, with the Netflix prequel The Dark Crystal: Age of Resistance about to release. (Please be awesome… please be awesome…)

On the other hand, it seems only natural that games (and movies, and books) which inspire other successful imitations should have additional versions, as some portion of the gaming public clearly wants those variations. Monopoly has been adapted to many, many themes, and while I still argue Monopoly is a terrible game (see our review if you need convincing), it continues to be supremely popular and well known. Risk has had several mediocre variations, a few interesting ones (Risk: Godstorm – which may have lent at least one mechanics idea to Blood Rage – and Risk: 2210 AD come to mind), and a genre-defining innovation (Risk: Legacy, firmly establishing the Legacy style of game). Even games like Scrabble and Clue have had a variety of adaptations/mutations to other themes – some of them quite good. For example, give Harry Potter Clue a try: with its shifting secret passages and House Cup point earning, new rules evoke a strong feel of the early movies.

How far should developers take the lineage of a classic game, though? If the hereditary traits of the game’s family tree fade too much, it can become unrecognizable – for example, if Talisman were made into a dice game, would it still feel like Talisman? Maybe not.

That’s the point, though. For some gamers out there, for whatever reason, Talisman didn’t hit the mark. Creating six different colors of the same game won’t bring in new fans. But sometimes, there’s enough interest in a property that game developers can take more than one shot at the target, maybe striking where a different set of gamers can appreciate it. Innovating around the theme of a popular property doesn’t have to dilute the strength of it, but can refine the flavor for different palates. Yes, the brand name is being used to attract old school fans, and the core mechanics might still be supporting the overall structure of gameplay, but change is good and helps keep a game relevant. Evolve or die.

I hope to try Talisman: Kingdom Hearts and Talisman: Batman Super-Villains Edition soon, keeping in mind the new experiences they were designed to be. And I won’t blame them at all if they let me kill things and take their stuff – I’d consider that a bonus.